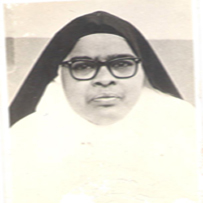 Maria Mata Province Hazaribag,is the daughter of Deva Mata Province,Changanassery.We recall with gratitude that the first 54 members of our Province were formed and sent by the Mother Province. It was the great missionary zeal and vision of Mother Maurus,the then Mother General of Changanassery that laid the foundation for the missionary enterprises which blossomed into a full fledged province today with a wide variety of apostolic involvements. The annals of the Province will be incomplete without the grateful remembrance of the valuable contributions made towards its growth by all the members especially the Provincials of Changanassery Province. No less significant is the prayerful support we experience from our elder sisters both past and present. 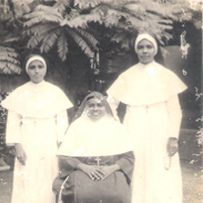 The sequence of events that constitute the specific history of Maria Mata Province begins with the arrival of our pioneers Rev. Sr. Lourdes Mary and Rev. Sr. Seraphia in Koderma on 22nd June 1968. In those days Hazaribag-Palamau area was under the grip of a devastating famine resulting instarvation and debilitating sicknesses in many villages. The Hazaribag Jesuits in collaboration with the Government and private agencies set themselves to the daunting task of bringing relief to the suffering people. Medical help was much sought after as malnutrition and subsequent diseases plagued the famished people. There was a hospital in Koderma, started in 1956 and run by the Medical Mission Sisters.But at this crucial juncture due to shortage of personnel,the Medical Mission Sisters were thinking of closing down the hospital.Rev.Fr.0'Connor,the Jesuit Provincial of Hazaribag sent Rev.Fr.Purcell S.J to Kerala with the urgent mission of finding some other congregation to run the hospital.Fr. Purcell contacted Rev.Fr.AntonyKaithara and who in turn contacted Mother Maurus. Mother Maurus responded quickly to the call;and it was decided that Sr.Lourdes Mary and Sr.Seraphia would embark upon the mission.

Eventually on 22nd Oct.1968 the hospital was officially handed over by Rev.Sr.Carol Hess, Sector Superior of the Medical Mission Sisters to Mother Maurus who had come to Koderma for the occasion. The seed was sown; soon it would take roots and grow like a tree that is planted near running streams. The life-giving streams of God's providence and mercy would nourish the Sisters abundantly in the subsequent years of their missionary activities. The F.C.C. Mission based at Koderma began to expand rapidly under the able leadership of Sr. Lourdes Mary.

On 13th June 1980,Koderma Mission was raised to the status of a 'Mission Region' by the Superior General Mother Romualdin the General Chapter.The new region was inaugurated on 13th Sept. 1980 by Rev. Mother Zacharias, Provincial of Changanassery, in the regional house at Koderma. On that day Rev.Sr.Joselet Mary took charge as the first Regional Superior. With the official proclamation as a region,permission was granted to start formation programme in this Region and we started our formation for the 1st batch of candidates in Koderma.

The good Lord who started the good work through the Koderma Mission carried it forward despite all odds.On 17th Feb.1990, the Region became a Vice-Province under the leadership of Sr.Delphinewho became the 1st Vice-Provincial. Under the guidance of the Major Superiors Rev.Srs.Lourdes Mary, Joselet Mary, Delphine, Therese Mary, Regy Maria and Sr. Caroline the Province expanded into many and varied apostolic activities; opening its own schools; starting apostolic communities in far off villages;providing primary health care in many centers; working for women's development; social justice and welfare of the poor; taking care of the destitute and above all collaborating in combined formation along with the other Provinces.

The Metamorphosis of the Koderma F.C.C. Mission into the present-day Maria Mata Province,Hazaribag culminated in the shifting of the Provincial House from Koderma to Hazaribag on 30th Oct. 1993. The present Provincial House was blessed and inaugurated on 26th April 1997. The General Chapter which was held at Aluva on Dec.4th 1997, declared Maria Mata Vice-Province, Koderma as Maria Mata Province, Hazaribag. At present the Province has 198 Sisters (158 seniors and 40 juniors) 47 formees and 34 houses. It has been a long journey of faith and trust in the Divine Providence and one must hope firmly that He will make use of His humble servants to build up His Kingdom of love, peace and fraternity in the days to come.